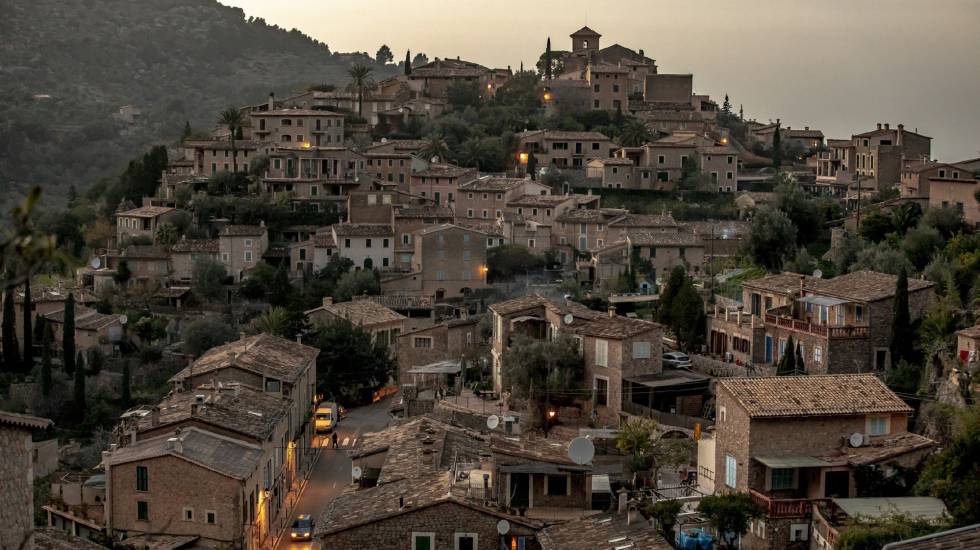 Nestled at the foot of the Tramuntana mountains on the west coast of Mallorca, in Spain’s Balearic Islands, Deià is a haven for artists and musicians and was home to the novelist Robert Graves before his death in 1985.

Surrounded by hills, the village is at the heart of a municipality that covers 15 square kilometers and stretches five kilometers along a rugged coastline. With its narrow winding streets and stone-clad houses, Deià is one of the most visited spots on the island. While it has a meager 400 residents in the winter months, it triples its population in the summer, with day trippers swelling the numbers. In fact, while there are only 617 residents on the local census, there is enough authorized tourist accommodation for 1,126 visitors.

The contrast between the deserted streets in winter and the crowds in summer has prompted the environmental association Terraferida to point out that the website Airbnb alone offers space in Deià for more people (618) than actual residents. Terraferida spokesman Jaume Adrover is asking Deià’s town council to freeze the number of licenses issued for vacation rentals. “They should suspend them as soon as possible to curb land speculation and avoid an avalanche of applications for building permits,” he says.

The Mallorca Council, the island’s legislative and executive body, has declared four of its five main towns to be at saturation point, meaning that a permanent residence can only be rented out to tourists for two months of the year.

The excessive number of tourists has meant that during the high season, water has to be shipped in to these towns from Palma in trucks. “In Mallorca you can’t announce real estate development plans ahead of time; you have to approve them first and then make them public, otherwise they have a pull effect and end up being counter-productive,” says Adrover.

Deià’s mayor, Lluís Apesteguia, describes the situation as unsustainable both for Deià’s community and for its tourism. “At this rate, Deià has little time left as a community: three generations, no more,” he says.

Apesteguia took over as mayor in the last elections, leading a leftist-green alliance that toppled the right from power for the first time. Among other issues, it is committed to reviewing the regulations concerning tourist properties in a bid to contain the phenomenon.

While the reviews are underway, other measures are being implemented such as tax deductions for owners who offer long-term rentals at reasonable prices, as well as support for young people and students who want to rent in the municipality. The mayor insists that residents have to choose whether they want to be a real village or a resort, and favors setting some limits while keeping the significant role of tourism at the fore. “We live from tourism, but not for tourism,” he says.

Apesteguia admits that it will not be easy to curb the trend, particularly given the amounts of money that exchange hands in the peak season and the obvious economic benefits for the owners of vacation rentals. There are villas on Airbnb going for more than €20,000 a week. The most expensive Deià property listed on the website costs €20.720 for six nights; it has 11 bedrooms and 6 bathrooms.

According to Clara Castanyer, a real estate agent and Deià resident, “there is a problem with access to housing, and not just because of the tourist rentals.” She believes that the local council could “do more” to increase the social housing quota and is critical of the real estate tax (IBI). “It is very expensive,” she says. “The town’s average is around €1,000.” In Deià, residents have been paying the legal minimum – 0.40% of the property’s rateable value – since 2014.

“The matter is being discussed in the community and there has been a change in mentality,” says the mayor. The locals believe it would be advantageous to distribute the town’s tourism more evenly throughout the year instead of being exposed to a tsunami of visitors in the three summer months. This would have very positive repercussions socially and economically, but is very difficult to achieve.

But while there is an awareness that the town has reached saturation point and a certain level of control is being sought by residents, these same residents are also aware of the positive aspects of tourist rentals. Pedro López, an electrician and native of Deià, is not against vacation rentals because these homes are empty in the winter. “It is a pity that they are not rented out throughout the year,” he says, adding that the problem lies in the “overcrowding and madness of the peak season.”

Antònia Oliver, also a native of Deià and a lifelong resident, agrees that the real estate tax is very expensive and rents are exorbitant. She says that Deià cannot cope with the growth it has experienced in recent years.

Preferring to remain anonymous because of the small size of the village’s community, the town’s shopkeepers have voiced different opinions; one owner of a grocery store favors a more even distribution of tourists throughout the year while another points out the benefits of accommodating a large number of tourists. “The tourist rentals are very good for us,” he says, though adding that more control in the summer months would not go amiss.

The pharmacist Carlos Paredes says that homeowners should be able to do what they want with their own property. “People see a business opportunity and they have every right to take advantage of it.”

PP chief: “Facilitating a PSOE-Podemos government would be suicide”