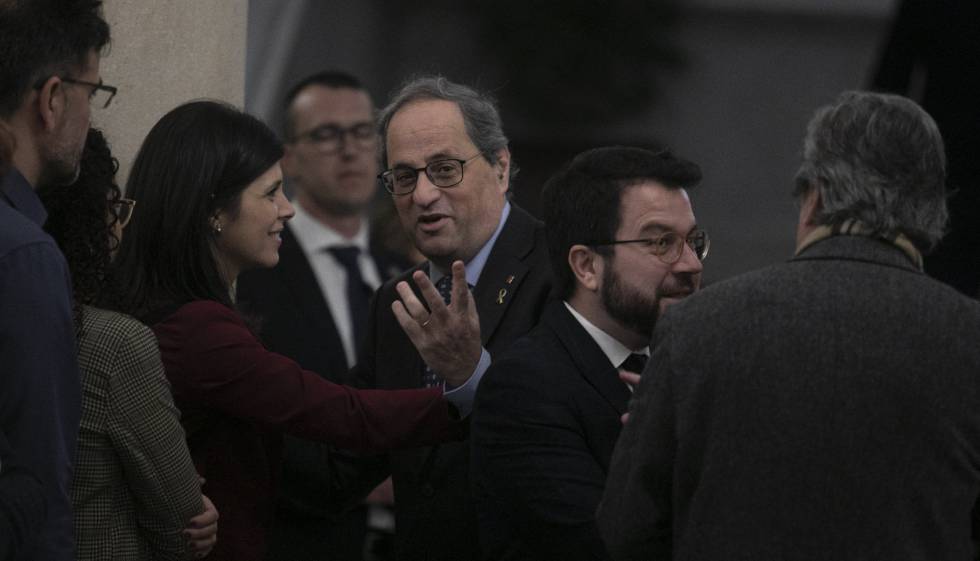 Catalan premier Quim Torra announced on Wednesday that there will be a snap election in the northeastern Spanish region once the regional budget is passed by parliament, a process that could take between two and three months.

Torra made the announcement during a surprise institutional statement, after the Catalan parliament earlier this week decided to support a judicial ruling stripping the premier of his seat in the regional parliament. This move has evidenced a rift in the governing coalition, which is made up of the separatist parties Together for Catalonia (JxCAT) and the Catalan Republican Left (ERC), with the support of smaller pro-independence groups.

No government can function without unity

“The term had no political future if unity cannot be maintained,” he said on Wednesday. “No government can function without unity. […] We have to recover the path of unity, resume our shared struggles.”

Torra on Monday refused to give up his seat in the regional parliament, ignoring decisions by the Supreme Court and the Central Electoral Board stripping him of his credentials after he was found guilty of disobeying electoral rules.

The separatist leader called on the speaker of the Catalan parliament, Roger Torrent of ERC, to also ignore these orders, but the latter refused and warned Torra that if he took part in the day’s voting, his vote would not be counted. In the end, Torra got all the representatives from JxCAT to abstain from voting on four motions that were on Monday’s agenda. The move triggered renewed calls for early elections from the Catalan Socialist Party (PSC).

The ERC was crucial in getting Pedro Sánchez of the Spanish Socialist Party (PSOE) back into office as prime minister at an investiture vote held in early January. In exchange for its abstention, the ERC secured a pledge from Sánchez to hold talks on the political situation in Catalonia, which has been immersed for years now in an independence drive. As part of this deal, Sánchez will meet with Torra in Barcelona on February 6.

After Torra’s announcement, Carlos Carrizosa, from the center-right party Ciudadanos, called on Sánchez to cancel his meeting with the premier. “What is clear from [Torra’s] appearance is that the separatist movement sets the schedule,” he said.

Pablo Casado, the leader of the conservative Popular Party (PP), also blamed Sánchez for the situation in Catalonia. “We don’t understand why Sánchez is keeping his meeting with Torra, when he is no longer the premier of Catalonia,” he said at a meeting with self-employed workers in Madrid.

According to Casado, Torra cannot be considered premier given he has been stripped by the courts of his position as lawmaker. The leader of the PP added that he will denounce the premier for usurpation of public functions.